13.5 miles – overcast but mainly dry until the cataclysm

Written as a Postscript

Before the start of the walk, I had no idea whether I would finish it, or even complete the Cape Wrath Trail. I was underprepared and my rucksack was way overweight. I decided I must have been crazy to start with the hardest bit first, a view I held for the first three weeks. However, I decided that if I could get through the first three days, then I could probably make it to Ullapool, and if I could keep going to Ullapool, there was no reason why I couldn’t make it all the way to Hastings. Well, Day 3 very nearly did put an end to the walk; it certainly made me realise why the Cape Wrath Trail is considered the toughest trail in Europe.

Looking at my opening sentence below, scribbled the next day in my notebook, I am amazed at how light-spirited I seemed. I sense I was glossing over how precarious my situation had been that night. But I’m getting ahead of myself…

My Notes That Day

You don’t have to like peat bogs to do the Cape Wrath Trail, but you have to be willing to go through them without objecting too much.

This one did it’s best make me unwilling to traverse any more, but just fell short of the mark.

I felt positive as I set off, although the path beside the Rhiconich River became narrower until it was lost in heather and peat bog. I had treated myself to dry socks and the day was dry, though dull. As the river became a burn, and the burn a trickle of puddles, one squelching into the next, so my horizon shifted from the the head of the glen, to the next 20 yards, to the where to put my foot for the next pace. With lots of dead ends in a maze of pathless bog, my pace dropped to just 1 mile per hour, which was well below the slowest I had contemplated. I was thus greatly relieved when I finally made it to a 4X4 track.

It was a true ‘wilderness day’. Apart from one brief road crossing I passed but four people all day and saw no other evidence of civilisation. One of the four asked me whether I was taking the ‘easy route’ or the ‘difficult one’. “The easy one,” I said optimistically; however, I soon began to doubt it.

The climb up from the Laxford River towards Ben Dreavie is an arduous one. The steep gradient was expected to start with, but once I had reached a level with the top of the mountain as I had seen it from below, I thought the worst must be over, and I stopped to have lunch beside what I considered to be ‘highest point of the day’s travail’, next to a pretty waterfall.

I pushed onwards. At each twist and ascent in my journey I thought ‘Now, surely I must be at the top.’ But the next four hours took me higher, boggier, rockier, slower, and quite soon pathless. Each pass to the next glen I believed I had attained turned out to be yet another decoy leading to a yet higher climb. “If this is the easy route, what on earth is the difficult one like?” I wondered, and I soon convinced myself that I had really taken the difficult route.

(Later, when I saw the difficult route on the map, I was so relieved I had gone for the ‘soft option’.

It was, truly, only twenty minutes before I reached the summit that I realised that it was indeed there that I was being led.

Exhausted, yet exhilarated, the vista suddenly opened before me. I was utterly taken aback; it was as if a voice had spoken from all about me, saying:

“THIS IS / I AM GREATER THAN YOU; YOU WISHED FOR THIS; BE BOUND BY ALL THAT GOES WITH IT.”

But that grandeur; that majesty and greatness has stuck with me: this is indeed what I had come for.

By now I was absolutely shattered. I decided to pitch my tent at the first suitable place I could find, by some water, in the lea of the mountain. To my amazement, I saw there was a track leading down the other side of the mountain – no doubt it was to meet it that the route had taken me to the summit. I followed it for half a mile before finding a level, solid bank, by a tiny loch; I got my tent out.

And then the heavens opened.

The storm was cataclysmic: the rain torrented both down – and up! My down-filled ‘puffy’ was soaked at the bottom and up both the sleeves, even though it was under my waterproof jacket. I gaped at the tent in the howling wind: “Will this stand up all night?” In the end I realised I had no choice: I was wet and getting colder by the minute; I had to risk it and hope for the best. And once inside I wasn’t coming out. I was separated from the deafening rain by a fabric which weighs just 1.0 oz per square yard (24g/m2).

I prioritised warmth over nutrition. I immediately put on all the dry clothes I still had and dived into my sleeping bag. A nip of whisky, a handful of nuts, and then I huddled into sleep. 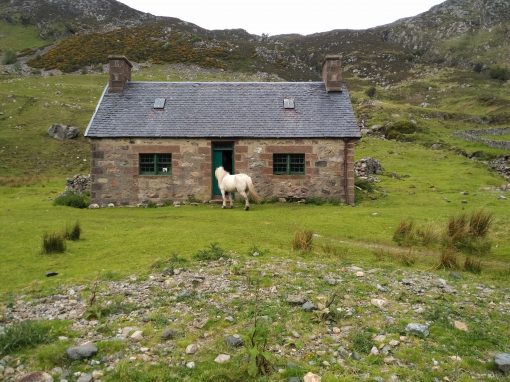 11.8 miles -dry but cloudy The tent did make it through the night, bless it! I slept for twelve, wonderful

END_OF_DOCUMENT_TOKEN_TO_BE_REPLACED 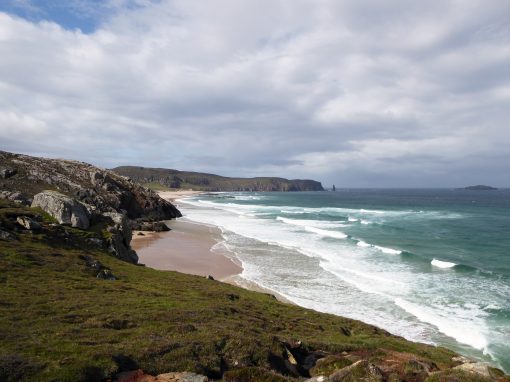